“We are deeply disappointed but not surprised at this ruling,” said Wisconsin Family Action President Julaine Appling. We knew we had the most liberal panel of judges on the 7th Circuit. When they denied the state’s request to have the case heard before all ten judges on the court, we pretty much knew what to expect.”

“I was in the courtroom last Tuesday. I knew then what the outcome was going to be. Judge Posner in particular made his opinion quite clear. His clarity took a backseat only to his sarcasm,” Appling noted.

The opinion affirmed District Judge Barbara Crabb’s ruling and judgment, which means that the stay on removing the amendment remains in place while the case works its way through the appeals process. Wisconsin Attorney General JB Van Hollen has publicly indicated that the state will appeal the ruling to the US Supreme Court.

Twenty states have had similar rulings. Already the 4th, 6th and 10th Circuit Courts of Appeal are either petitioning the US Supreme Court to take their cases or will be soon.

“We’ve known all along these cases from all across the country would end up at the US Supreme Court. Apparently the 7th Circuit wants to get in at the front of the line on that process,” Appling commented.

Appling commented, “We finally have a federal judge with courage, common sense and an understanding of the law—one that is not in the pocket of a small minority of people that are determined to redefine and thereby deconstruct society’s most important institution. That’s hopeful as we head to the highest court in the land.

“The struggle to preserve and protect traditional marriage is far from over. This ruling does not change the fact that a marriage of one man and one woman is the healthiest, most prosperous, and most stable place not only for the man and woman but also for the children they may bring into the world. The ruling is a denial of reality. While every marriage may not have children, every child has both a mother and father. This ruling denies children of either a mother or a father. Our organization will continue to aggressively take the message everywhere across this state that marriage between a man and woman is good not only for the individuals in a given marriage, but is also good for Wisconsin,” Appling concluded.

In June of this year, liberal U.S. District Judge Barbara Crabb ruled that Wisconsin’s 2006 Marriage Protection Amendment, voted on and approved by nearly 60% of those voting in Wi, was unconstitutional.  Wisconsin Attorney General J.B. Van Hollen appealed Crabb’s decision to the 7th Circuit Court of Appeals.

The Wisconsin case is joined by a similar case from Indiana. Wisconsin Family Action has already issued an amicus (friend-of-the-court) brief in the Indiana case; that brief will suffice for both cases as they are now being considered together.

It is unclear when the Federal Court will issue a final decision.

“Wisconsin Unites for Marriage,” a pro-homosexual group based in Wisconsin, formed by the ACLU, Fair Wisconsin and Freedom to Marry is planning a “marriage bus tour” to Chicago that day and a rally after the hearing.

WFA president Julaine Appling, will attend the hearing  on behalf of WFA and the others represented in the friend-of-the-court brief and shares, “There’s something more critical Christians can do than showing up there—and that is pray.  We covet your prayers for this hearing. We also urge Christians to visit wifamilycouncil.org and sign our Marriage Declaration.  That too is very important. We can do way better than 3000.

Federal Judge Brings Some Order to the Chaos

MADISON—Late today US District Judge Barbara Crabb granted Attorney General JB Van Hollen’s request for a stay on her order regarding the redefinition of marriage in Wisconsin. The judge also clarified her previous order as written in her original ruling issued last Friday. That ruling unilaterally declared Wisconsin’s Marriage Protection Amendment unconstitutional, thus trouncing on the votes of over 1.6 million Wisconsin citizens who approved the amendment in November 2006. Her injunction today ordered county clerks to issue marriage licenses to couples of the same sex. Her stay, however, means that the marriage amendment restricting marriage to one man and one woman remains in place for the duration of the judicial proceedings on this matter.

“While I disagree totally with Judge Crabb’s ruling in this case, I am pleased that she at least put a stop to the chaos that ensued from her original vague order in this matter. It is altogether appropriate that this stay be ordered while this case works its way through the appeals process,” stated Julaine Appling, president of Wisconsin Family Action (WFA), and one of four other WFA board members who filed a “friend-of-the-court” brief in this case. “Judge Crabb’s ambiguity and vagueness in her original order has caused undue and absolutely unnecessary turmoil in our state.

“The rule of law has seemed to be merely some pesky summer insect to many in our state who have urged county clerks to issue the licenses, in spite of what Attorney General J.B. Van Hollen has directed. This judge, in concert with those determined to redefine society’s foundational institution of marriage, turned Wisconsin from being a state where the law is respected into a place where apparently everyone, especially elected county clerks, can do that which is right in his own eyes. Fortunately, today we have clarity which should bring an end to the confusion. Clerks who persist in issuing marriage licenses to same-sex couples will be doing so in clear violation of the judge’s order.”

Attorney General J.B. Van Hollen has already appealed the decision to the 7th Circuit Court of Appeals in Chicago. That court has ordered both sides to submit briefs supporting their position of whether the appeals court should take the case. In light of Judge Crabb’s order and stay today, it would seem the way is cleared for that court to now take the case.

“As disturbing as all of the legal gyrations have been in this case, what disturbs us most is Judge Crabb’s decision regarding the amendment and what she said about marriage in her opinion. She made some breathtaking pronouncements that must be challenged. As amici, we are today releasing a response to some specific aspects of the Judge’s ruling.” continued Appling.

According to a Legislative Memo that went out from Senator Tim Carpenter’s (D-Milwaukee) office and a 10 a.m. press conference :

Subject: Co-sponsor LRB−0414/1 Repealing Constitutional Amendment Re Marriage
To:              All Legislators
From:    Senator Tim Carpenter
Senator Kathleen Vinehout
Senator Mark Miller
Representative JoCasta Zamarripa
Representative Chris Taylor
Representative Melissa Sargent
Re:      Co-sponsor LRB−0414/1 Repealing Constitutional Amendment Re Marriage
Very Short Deadline:  Noon, February 13, 2014
We are proposing to put to a vote of the citizens of Wisconsin a change in our state constitution that would repeal the prohibition on marriage equality and civil unions.
In a 2006 a referendum passed by 59% of the voters, Wisconsin’s Constitution was amended to exclude same-sex couples from marriage and prohibit same-sex couples from attaining any other form of legal family status.
In less than a decade, support for and laws regarding marriage equality have increased dramatically, as highlighted by:
A growing majority of Wisconsinites believe that the Marriage Amendment does not reflect their belief in how the state should recognize our families.  We believe that it is time to let the people of our state the opportunity to remove unwanted constitutional barriers to marriage equality.
If you would like to sign onto LRB 0414, please contact my office by Noon today, February 13, 2014 at 6-8535 or by return of this email.  A copy of the LRB is attached.  Representative Jocasta Zamarripa will be introducing a companion LRB in the Assembly.  Unless requested otherwise, legislators who sign on to LRB 0414 will automatically be signed on to the Assembly companion.
Analysis by the Legislative Reference Bureau
This constitutional amendment, proposed to the 2013 legislature on first consideration, eliminates the constitutional restriction that only a marriage between one man and one woman shall be valid or recognized as a marriage in this state and the provision that a legal status identical or substantially similar to that of a marriage for unmarried individuals shall not be valid or recognized in this state. A proposed constitutional amendment requires adoption by two successive legislatures, and ratification by the people, before it can become effective.

In 2006, Wisconsin’s voters overwhelmingly (nearly 60%) voted in favor of the Marriage Protection Amendment which clearly defines marriage as “between one man and one woman” and prohibits the state from recognizing “a legal status identical or substantially similar to that of marriage for unmarried individuals.”  Despite the affirmation that Wisconsinites do not want marriage redefined, Democratic Senators appear determined to make efforts to change Wisconsin’s constitution to legalize homosexual “marriage.”

During this Marriage Week, while our nation and state celebrate the God-ordained union of a man and a woman, our own state senators, as well as the ACLU, are busy attacking traditional marriage in Wisconsin.

Wisconsin Family Action president Julaine Appling is not surprised by the proposed bill or the ACLU lawsuit and states, “We believe our Marriage Protection Amendment language is strong and will withstand constitutional scrutiny.” 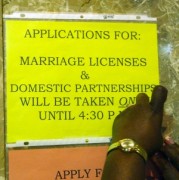 Petition for review filed to defend will of the people,

institution of marriage and Wisconsin Constitution

MADISON— Does Wisconsin’s marriage amendment permit the legislature to create a “domestic partnership” legal status that has the same procedures and requirements as marriage? That is the question the Wisconsin Supreme Court is being asked to address.

“The question essentially comes down to this: Does the marriage amendment mean what it says?” said Julaine Appling, president of Wisconsin Family Action and one of the plaintiffs in the lawsuit, Appling v. Doyle. “We have long said that we will continue to defend marriage, the state constitution, and the will of the people. This petition for review by the state’s highest court is the next step in that defense.”

Alliance Defending Freedom attorneys and their local co-counsel, Mike Dean of First Freedoms Foundation and Richard M. Esenberg, filed the petition for review on behalf of Appling and other plaintiffs Tuesday.

Wisconsin’s Marriage Protection Amendment, passed on a 59.4% to 40.6% vote by more than 1.25 million voters, states that “a legal status identical to or substantially similar to that of marriage shall not be valid or recognized in this state.” In June 2010, the Wisconsin Supreme Court, in McConkey v. Van Hollen, unanimously ruled that the entire amendment deals with a single subject—marriage.

Gov. Jim Doyle and Democratic legislators created the statewide, same-sex-only domestic partnership registry as part of the 2009-2011 state budget.  In their capacity as taxpayers, several WFA board members filed a lawsuit in the Dane County Circuit Court in August  2010, alleging the registry is in direct violation of the marriage amendment. In June 2011, the Circuit Court ruled the registry was constitutional. Shortly thereafter, the WFA board members appealed to the Court of Appeals, which last month agreed with the lower court and prompted the petition to the Wisconsin Supreme Court.

“The lifelong, faithful union of a man and a woman is the foundation of every healthy, stable society. The people of Wisconsin recognize this, and that is why they approved a constitutional amendment that specifically protects marriage from all imitators,” said Senior Counsel Austin R. Nimocks. “We are appealing the appellate court’s decision because this domestic partnership scheme is precisely the type of marriage imitation that the voters intended to prevent.”

Wisconsin Family Council does not necessarily ascribe to the opinions or views of the blogs on our blogroll. We link to blogs that we believe support Wisconsin's greatest natural resource, her families. We welcome comments on this blog--from those who agree and those who disagree with our viewpoint. However, we will not post comments that contain threats, veiled or overt, or foul or offensive language.