From the desk of Wisconsin Family Action president, Julaine Appling:

Democrat National Committee Chairwoman and Planned Parenthood advocate Debbie Wasserman Schultz came to Wisconsin recently and made some horribly offensive comments about Governor Walker and some of his policies she doesn’t like. She focused on laws that, in her opinion, attack women.

This often fire-breathing Democrat leader referred to Governor Walker’s opposition to a minimum wage increase and his signing a bill into law that would prevent people bringing employment discrimination charges against an employer from seeking punitive and compensatory damages in state court.  And she also mentioned the pro-life, pro-woman bills that Governor Walker has signed in the last three years. Clearly, Wasserman Schultz was trying to revive the ridiculous “war on women” idea that the liberals have been hammering on here and around the country for months.

I listened to these comments on the same day I read an article that was reporting on a recent released research study. The study, conducted by The Fred Hutchinson Cancer Research Center was published in the peer-reviewed Journal of Cancer Research. This unique research showed that the link between oral contraceptives and breast cancer in women may be greater than what previous studies have shown.

Essentially what the research found is that the less than one percent of women taking what is known as a contemporary “high-dose” oral contraceptive  are 270% more likely than women who are not using oral contraceptive to develop breast cancer.  The 78% of women taking a “moderate-dose” are 160% more likely to develop breast cancer than were women who were not taking the pills. And the 24% of women on a “low-dose” contraceptive showed no greater likelihood of developing breast cancer.  Overall according to the report, “compared with the control group, the women who had used birth control pills in the previous year had a 50 percent higher risk overall than women who had either never used the drugs or had used them in the past.”

If the Planned Parenthood-affiliated Guttmacher Institute is right, then over 10 million American women use birth-control pills—in other words, oral contraceptives. The study dealt with women ages 20-49, which, of course, would be the primary ages of women taking these pills. So what this means is millions of women in the prime of life are directly impacted by this research.

But what has been Planned Parenthood’s and mainstream media’s response to this research about the second leading cancer among women in America? Not surprisingly, but truly alarming, as near as I can see Planned Parenthood hasn’t even mentioned the research;  and the media has dangerously misrepresented it, trying hard to tell women there’s absolutely nothing to worry about.

Most stories reported the good news for the 24% of women in the control group who took low-dose oral contraceptives showed no greater likelihood of developing breast cancer, and then went on to say that while the risk is significant for the less than one percent of women taking the high-dose pills, no one should worry about that since so few women take the pill in that form.

What they blatantly did not report was that 78% of women in the control group took the moderate-dose pills. Also significant is that some research shows that most women do not know what dose of oral contraceptive their physician has them on. They also don’t bother to report that overall, the women in the control group taking oral contraceptives were collectively 50% more likely to develop cancer than those who weren’t. Now that is a war on women.

The bulk of the mainstream stories don’t even bother to report that a spokesman for the American College of Obstetricians and Gynecologists said, “Talk to your provider about the type of birth control you’re using and make sure it meets your needs in light of this new information.” No warning. Nothing. Just a concerted effort to mislead and thereby deprive women of information that can literally be life-saving. That is reprehensible and despicable.

Wasserman Schultz and others of her ilk are the ones waging the war on women. If they were honest and were truly concerned about women and their health, they would be doing everything they could to get the findings of this study out instead of making absurd allegations about Wisconsin’s governor.

What will your children be learning in the school they attend this year?  Will their teachers and school district support your family values?

As we approach a new school year, parents need to go the extra mile in checking out their local school district’s website and asking to review curriculum, as well as perusing the school library for inappropriate materials.

>>>>>read more from our friends at Focus on the Family HERE 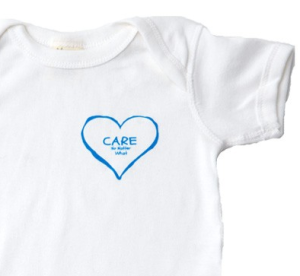 Care – No Matter What.

Seems ironic that the nation’s abortion icon, Planned Parenthood, should be selling, of all things, baby onesies with the above slogan.  Since only 8 out of 100 unborn babies make it out of Planned Parenthood abortion facilities alive, we doubt the sales will skyrocket any time soon.  If anything, this latest money grab attempt appears to be more like a major marketing faux pas.

VICTORY FOR LIFE! This week, the House voted 227-188 to ban taxpayer funding of abortions under HR7.

Wisconsin Family Action president Julaine Appling applauds Congress, “It’s encouraging to see a bill of this nature pass in Congress.  At a minimum, taxpayer money should not be used to pay for this procedure.  Abortion is not health care, and we need to quit insulting women by pretending that it is.”

The Wisconsin delegation voted along party lines, with 4 Republicans voting in favor and the 3 Democrats voting against the bill. Republican Tom Petri did not vote.

Tom Petri – Did not vote

Appling continued, “We owe a huge thank you to Rep. Jacque for his work on this bill.  Likewise, we are thankful for those who supported this measure. The liberal representatives in the Assembly went to great lengths in their opposition to this proposal. Their shenanigans on the floor last night showed once again that when they cannot attack an issue on its merit, they will make outrageous, unwarranted personal and organizational attacks.”

Sales from the Choose Life license plates will go to Wisconsin’s Pregnancy Resource Centers to assist in their life-saving, life-affirming work.

“Last session the State Assembly passed a resolution honoring Wisconsin’s Pregnancy Resource Center and proclaiming October 2011 as ‘Pregnancy Care Month.’  Just last night the Assembly passed a resolution recognizing November as Adoption Month.  It is altogether fitting that this license plate, the proceeds from which will be used to educate and care for women and their unborn children and to promote adoption be approved in the Assembly right now,” said Appling.

The bill still needs a hearing and a vote in the Senate, where Sen. Mary Lazich (R-New Berlin) is the lead author.

From the desk of Wisconsin Family Action Julaine Appling:

I love watching the Packers. But watching the Pack play in October is a bit difficult for me.  It’s about the pink hats, wrist bands, socks, cleats, shoes, towels, helmet decals, and a couple of weeks ago, even pink penalty flags that show up on the players and coaching staffs during the games in recognition of Breast Cancer Awareness Month. We all need to know the truth about Susan G. Komen for the Cure Foundation, the sponsor of all this pink.

There’s hardly a person who will hear this commentary whose life has not in some way been touched by breast cancer.  We all want real cures and real preventions for this disease that is the leading cancer among women and ranks second in the number of cancer-related deaths among women.  But there must be a better way to raise awareness and money for a cure than by having an organization that has strong ties to Planned Parenthood leading the way.

A few years ago the money tie that binds Komen for the Cure Foundation to Planned Parenthood was in the news a great deal.  For a while last year, and because of public perception and pressure, Susan G. Komen stopped giving to Planned Parenthood. However, the organization soon recanted and reinstated the funding stream. The argument that the Komen Foundation makes for funding Planned Parenthood, in their own words, is that “In some areas of the U.S., our affiliates have determined a Planned Parenthood clinic to be the best or only local place where women can receive breast health care.”

Such an assertion bears looking into—and when you do, you might be surprised to find that first Planned Parenthood does not do mammograms.  They refer for mammograms, but they don’t actually offer the service.  Just how much money does it take for a Planned Parenthood affiliate to tell a woman where she can get a mammogram?

Ok, so maybe Planned Parenthood facilities provide other screenings or tests, but is Planned Parenthood really the “only local place” where “some women in some communities can receive breast health care”—especially low-income women?  Of course not.  Hospitals frequently offer free screenings, as do other clinics and organizations.

Well, then, is Planned Parenthood the “best” place for such treatments, education, screenings?  That, too, is highly doubtful.  Planned Parenthood Federation and its state level affiliates are not primarily medical clinics.  They are primarily abortion providers, even though they don’t agree with that characterization.  However, that’s where the nation’s leading abortion provider makes its money.

It’s hard to imagine that a place that focuses on preventing babies from being born by hawking contraceptives and further kills babies in utero, is the best place to go for treatments, education, and screenings for breast cancer.

Making the Komen/Planned Parenthood link even worse is that reliable studies continue to show a very real link between abortion and breast cancer.   In some groups, the risk of getting breast cancer increases twofold for women who have had abortions.  The attempt to cover up this information is staggering.  We have tried in the past to get this abortion-breast cancer link information included in Wisconsin’s Women’s Right to Know law—with no success.  However, the science is there, for those who want to—or are willing—to see it.  So, here’s a group that is supposed to be finding a cure for and prevention methods for breast cancer giving millions of dollars to an organization that is contributing to the problem.  Something is seriously wrong with this picture.

Please consider the following. The Planned Parenthood-friendly Guttmacher Institute reports that abortion rates are 4 times higher for black women than white women.  Commensurately, the Centers for Disease Control, the incidence of breast cancer from 2000-2009 has “increased significantly by 0.7% per year among black women,” while the incidence of breast cancer over the same period has “decreased significantly by 1.0% per year among white women.” Coincidence? Maybe. Just one factor in the breast cancer issue? Perhaps. However, add this information to the research that is being done on the abortion-breast-cancer link, and I think it’s time we paid attention. Women’s lives are at stake.

It’s likely very unrealistic for me to expect the Packers to stop wearing pink in October.  But, at a minimum you and I can and should be good stewards of our money and support organizations working to battle breast cancer but that don’t support Planned Parenthood. The “pink link” is becoming too obvious for us to ignore.

Wisconsin Family Council does not necessarily ascribe to the opinions or views of the blogs on our blogroll. We link to blogs that we believe support Wisconsin's greatest natural resource, her families. We welcome comments on this blog--from those who agree and those who disagree with our viewpoint. However, we will not post comments that contain threats, veiled or overt, or foul or offensive language.